Always prepare for the unexpected because the unexpected always happens. It just comes under various labels. Sometimes people will label something an emergency based on how it affects their comfort level.

There are many inconvenient and annoying times in life that don’t actually fit the parameters of a true emergency. When an emergency hits, you need to identify what the emergency actually is, the person or group of people the emergency affects, and the potential duration of the emergency.

This will help you be able to define if it’s an ordinary emergency of a SHTF situation. With every emergency, you should be able to determine if the situation is salvageable – or if it’s it not.

When a situation is un-salvageable, that’s a good sign that you’re dealing with a SHTF situation.  There are four different kinds of emergencies. The first kind is an ordinary emergency.

A flood that happens in your area where the water covers the roadways is usually an ordinary emergency. These kinds of floods will resolve in a short term. The damage to personal property and the potential for fatalities is fairly low.

However, if the flood occurs after several days of torrential downpours, it can easily become a SHTF emergency. An example in this case would be if the flooding became so bad that the waters washed away bridges and roads and cut people off from being able to get out to get the things that they needed to survive.

It would also be a SHTF emergency if the water depth reached a point to where it flooded homes and only rooftops were visible.  A power outage is often thought to be an emergency, but this is only an emergency if it affects a life such as someone who’s depending on electricity to stay alive.

Losing power is inconvenient – but it’s usually a short term situation that doesn’t markedly change your life. Assuming the crews will be out repairing the power, you might be inconvenienced a day or up to a week, but nothing you can’t ride out.

There can be times where a power outage becomes a SHTF emergency. In a case like that, it would be an emergency if power grids went down and the blackout was going to be long term.

For those who are unprepared, there would be loss of perishable food, no ability to heat (or cool) a home and the water supply could be affected. Then, it would be a SHTF emergency.

When the power goes down long term, it affects every aspect of your life – and not just at home. When there’s extended loss of electricity, it can bring a city to a halt.

Businesses can’t operate cash registers. Gas stations can’t pump gas. Traffic control lights don’t operate and driving can become hazardous. If you have a situation where there are long term power outages, then you run into instances where people hurry to the grocery store and they fight to take whatever they can get their hands on.

This kind of behavior happens because they know that things could get worse and they realized they weren’t ready. When there’s extended periods without electricity, the level of crime also goes up.

This is why, after every major disaster, you always hear on the news about people who want to break in and steal and loot. These crimes of opportunity always happen when chaos disrupts daily living.

There are those who consider the lack of normal utilities an emergency. For example, if something goes wrong with the sewer system and sewage backs up into a home, people consider that a big emergency.

But even something as upsetting as sewer back up is still just an ordinary emergency. However, if that sewage is spilling out onto the streets and there’s no crew coming to fix it, it becomes a SHTF emergency because whenever there’s raw sewage, the risk of getting an infection or a disease from it greatly rises.

This is also why in many third world countries you’ll see certain types of diseases that are associated with poor sewage management. Your immediate panic over the situation can heighten your reaction to something like this, though.

Having your only means of transportation break down can be stressful. It can place a heavy burden on you and your family. But this is considered an ordinary emergency.

But, if there’s a situation where you need to bug out and can’t because you have no way of escaping, then it’s a SHTF emergency. If you’re reliant on public transportation during an emergency, that’s a big problem.

There are specific things related to your personal needs that can be considered an emergency. If someone suddenly as no access to water in their homes, that’s still only an ordinary emergency.

It becomes a SHTF emergency if this lack of water supply is going to be a long term situation. You can’t survive without a clean supply of water. If you’re going to be without water for longer than three days, then it can become a potentially life threatening emergency.

A lack of food can be another issue. If you were to lose all the food that you have, this is still only an ordinary emergency as long as it’s short term. If it appears that there will be no replenishing of food supplies, then that’s a SHTF emergency.

Having something go wrong with your home so that the shelter it provides isn’t what you’re used to can be an ordinary emergency. An example of this would be if a tree limb fell through the roof and you had a hole that you suddenly needed to repair in order to keep out inclement weather.

It becomes a SHTF emergency when your shelter becomes completely unlivable and you don’t have a backup place to go. This is especially true in areas when you have a lack of shelter and the weather is or becomes dangerous.

Needing shelter to get out of dangerously low temperatures or dangerously high ones is considered a SHTF emergency. There are elderly who are much more affected by extreme temperatures, too – sow hat might be an ordinary emergency to you can be imminent danger to them.

This is why you need to have a survival garden that’s some distance from your house. That way, you can also go there for a food supply when you need to. Having multiple supplies is a smart move.

These kinds of emergencies can be compounded if something extraordinary is going on in your area. These would be things like a series of dangerous storms or life threatening temperatures are coming to your area.

When a tornado or hurricane threatens where you live, this can be an ordinary emergency if you live in a state that’s known for its emergency preparedness and you yourself are also prepared.

But if you’re not prepared, then it turns into a SHTF emergency. An example of this would be people who live in a beach home and don’t leave despite mandatory evacuation orders. When the hurricane rushes ashore, their home is flooded and they’re scrambling to stay alive as the water rises.

A landslide is an ordinary emergency unless it threatens homes or businesses or the human lives. Then it becomes a SHTF emergency. Though acts of nature have happened for centuries and will continue to happen in the future, most people are sadly unprepared with what they’re going to do to take care of their basic needs.

On the other hand, there can be widespread chemical spills that can make an entire area of a town or city unlivable and you would need to evacuate. If you’re not prepared to get out, this could be a SHTF emergency.

It’s an ordinary emergency when someone around you gets ill or even when groups of people around you get ill with something like the flu. However, if that illness is something that has the potential to sweep through large groups and cause catastrophic death tolls, such as Ebola, then it’s a SHTF situation and you need to get your gear and get to safety.

There are terrorism activities happening all over the world. These are emergencies where people are injured or killed. When it comes to your area and impacts your family, it’s a SHTF situation that requires you to get yourself and those you love to safety.

Remember that it’s not a matter of if you should be prepared for a SHTF emergency but when – because they do happen. The news is full of people who get into extraordinary SHTF situations.

Some of them are prepared and survive. The ones who aren’t don’t live to tell their story. You can’t stop ordinary emergencies or SHTF emergencies from happening to you or to your family.

No one can control the weather. Or riots. Or acts of terrorism. You don’t have the power to wish away bad things. But you can stop being unprepared and take care of putting a plan in place right now that will ensure the necessities and survival for yourself and those you love. 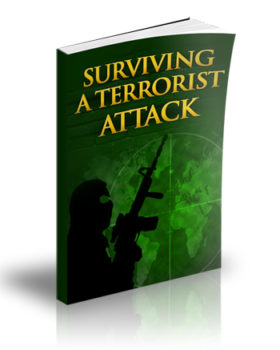